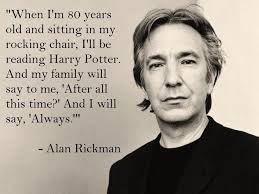 In 2001, back when I was eleven years old, I started reading Harry Potter. It was a series that defined a generation, and that continues to impact people of all ages, nationalities and languages. It is (in my opinion) one of the most important children’s series to have ever existed. – I say “children’s series” with the full understanding that anyone can enjoy it, but being based on the original target audience. That being said, I don’t think anyone could have anticipated what a phenomenon it has continued to be since the first book, Harry Potter and the Philosopher’s Stone, was published in 1997 (UK) and 1998 (North America).

Like I said before, I didn’t get my hands on the first Harry Potter book until sometime in 2001. And believe it or not, I didn’t even really want to read it. My librarian recommended it to me – I was a very active member in the youth reading clubs – and I figured I’d give it a go. Then, it sat on my desk for two weeks before I finally opened it up. And as they say, the rest is history.

So now I’d like to rediscover that chapter of my childhood. I never once stopped loving Harry Potter, or watching the movies or geeking out over Slytherin swag. But I want to read them all, in order cover to cover again. I hope you’ll all join me on this journey as I blog about the process.  And because I love Harry Potter, after all this time. Always.

1 thought on ““Always” – Rereading Harry Potter from the Beginning.”