Book Review: Earth Girl (Earth Girl Series # 1)
Don’t Judge A Book By It’s Cover – a term most of us are familiar with and I’ll admit it: I do. This time, I was smitten by the mysterious blue cover and I needed to know more. Then I read the synopsis and I immediately hopped on the waiting list at my local library. 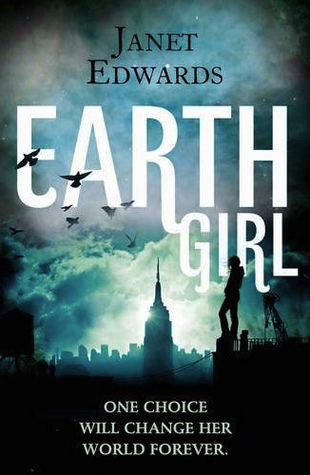 The official teaser for Earth Girl is this:

A sensational YA science fiction debut from an exciting new British author. Jarra is stuck on Earth while the rest of humanity portals around the universe. But can she prove to the norms that she’s more than just an Earth Girl?

2788. Only the handicapped live on Earth. While everyone else portals between worlds, 18-year-old Jarra is among the one in a thousand people born with an immune system that cannot survive on other planets. Sent to Earth at birth to save her life, she has been abandoned by her parents. She can’t travel to other worlds, but she can watch their vids, and she knows all the jokes they make. She’s an ‘ape’, a ‘throwback’, but this is one ape girl who won’t give in.

My thoughts were: All Right! A strong female character that (hopefully) I won’t end up hating! So far so good, I really like Jarra. She’s a smart, determined girl who despite her Handicap says “eff you” to society and tries to live her life as if she were “normal”. I think that can speak to anyone living today, about overcoming challenges you face and being yourself, living life to the fullest every day. What I just didn’t get was why some people couldn’t live on other planets. Why not people who could live in some places and not others? I know it’s necessary for the plot, but I’m hoping more gets revealed in book 2, Earth Star.

Jarra sometimes is too good to be true. She’s way more experienced in the field than other students, knows how to fly a plane etc. Sometimes it can get a little dry “Oh look she knows how to do that too.” And in the synopsis, it’s mentioned that she “can’t hide in the back of the class anymore.” Except she NEVER did. She was schooling them right from the beginning – so I thought that was a bit misleading. However, Edwards did explain how she was so much more further ahead than her class, she simply had the advantage living on earth all her life. Despite the fact she had all the experience, how she led the class in everything and no one seemed to care was annoying. Sometimes Jarra was just too perfect.

While living in the fantastical world of Earth 2778, the author Janet Edwards gives all of the cast members believable pasts and presents. They’re kids in the first year of college – included is all the awkwardness, hormones, drama and romance that we remember (or will experience) from those years. The emotions and relationships were all fairly believable and there was even spins on the stereotypes, eg. the rich popular girl ends up not to be a jerk. The love interest Fian isn’t really my type (I’m more of an Alpha-man fan) but it was nice to see less stereotypical take on the YA love tropes.

Jarra’s inner struggles were well illustrated and it was helpful that it was written in first person. To avoid spoilers I won’t get into much detail here, but around 50% into the book she suffers a shocking loss and goes inside herself, reemerging as a character, Military Jarra not the Jarra we knew from before. I have mixed feelings about that and it was confusing at first. I like the real Jarra much better, and I’m sure the author intended it to be that way, but Military Jarra was too cocky for me. Eventually she snaps out of it, but I found it too sudden.

Oh the world building – what can I say? I loved it! Now keeping in mind I’m not a Sci-Fi reader most of the time, I know other people did have mixed views on the world, but I thought it was well put together. There was history, back stories, culture, customs, languages – this list goes on.  I think it all tied in really well, but sometimes the chunks of history got a bit overwhelming and I started to feel like I was reading a textbook, however it was all necessary to the plot. I just wish it could had been done in a less “info dump” manner. The technology was awesome. I especially enjoyed the slang terms like “amaz” and “newzies”, it was close enough to how we speak now that I knew what was being said and it flowed into regular conversations seamlessly. I’ve even caught myself thinking “nardle” a few times since finishing the book.  From history to entertainment, transportation to food, Edwards has really put effort into making the world of 2778 come together full circle.

Also I just need a moment to share with you all how much I loved the hover suitcases.

It was such a small thing in the world-building, but I went giddy over it. But honestly how can you not when it was phrased like this: “My bags gathered up in a tight group behind me, bouncing up and down slightly in mid air like obedient but excited puppies.” (Chapter 3, Earth Girl)
I even tweeted about it. (Sad to say I didn’t get hover luggage from Santa.)

Reading #EarthGirl by @JanetEdwardsSF … and all I can say is I want hover luggage for Christmas! #AllIWantForChristmas #amreading #yabooks

Even though the ending was a bit anti-climatic (eg. the big “I’m an ape-girl” reveal was nearly non-existent), I think this book deserves a lot more attention than it’s been getting. I’m not even a Sci-Fi fan and I loved it. As soon as my copy of Earth Star comes in, I will most likely go into hermit mode and read it in one sitting.