This image pretty much sums up my feelings about the House of Night Series by P.C. Cast and Kristen cast.

So, this review isn’t going to be a long one, but I would like to say that I really did start off liking the House of Night series. I thought the Casts’ take on vampires (or vampyres in this case) was original and interesting. They mixed lots (sometimes too much) mythology and science into the world. The characters were OK at best and the story line could have easily been edited into 6 books (give or take).

I loved the first three books, and then after that my reaction to everything was WTF.
It just dragged on and on and on and on… you get my point. Riding the YA gravy train.

I picked this book up because I’m OBVIOUSLY a fan of vampires. Except and such other atrocities. When I read the teasers for this series I had high hopes. Not that those hopes are completely faded, because as I said the vampires themselves were interesting and unique.

These vampires sport magick face tattoos when they Change, and Zoe gets body tattoos because she’s the High Priestess of Mary Sues. I found the tattoos lame, but I can see how a younger audience would like them.

The story itself was just flat and most of the characters were annoying tropes involved in typical love triangles. I also did not like the portrayal of the homosexual characters and the African American characters. They were unbelievably stereotypical and offensive – though I appreciate that the authors were trying to be inclusive, it was a complete failure. There were also quite a few complaints online about Zoe getting to “hoe-ish” (to use Cast’s term) with all the love triangles and Warriors and Consorts etc.  Now I’m all for triads and I’m against slut-shaming, but in this particular series it became an over used plot device.

So! You’re probably asking why I bothered to continue reading after the 3rd book. Because I try my best to never give up on a series (I nearly gave up on Harry Potter – no joke) so I never want a bad book in a series to cause me to miss out. I actually though House of Night had redeemed (no pun intended) its self at the end of book 11, Revealed. The ending was so powerful, the last scene with the bull and Neferet had me nerd-gasming for days. Literally. When I finished, I still had months to wait for Redeemed to come out so I hopped on the waiting list and hoped that House of Night would have a strong finish. 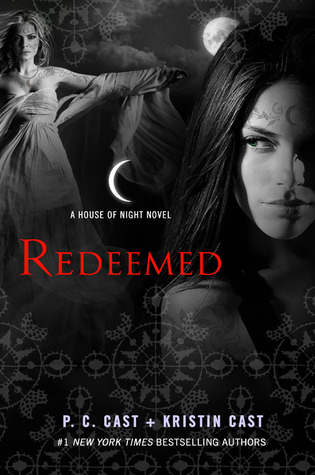 Upon finishing Redeemed today, I’ll just say it was a satisfactory ending and I’m glad this series is over so I can carry on with my other reading lists. I was really hoping for a bigger showdown than what was written and the pacing was off, considering how long the other books took. So many awesome characters could have been included in the finale and even the High Council was absent from the end. (Not including the new High Council run by teenagers – that’s laughable.) The fight scenes were ok, the dialogue was over worked and Neferet’s reign of terror finally ended. The epilogue wrapped most things up in a neat little bow – however, it was left open for sequels. Hopefully the Casts will take a break from House of Night world for a while.

The covers were pretty, all of them. I enjoyed the formatting and presentation of the books very much. I also heard rumors of a movie or tv series was in the making. Let’s just say that if it happens, I will not be watching.