After being blow away by Perfect Ruin, I couldn’t wait to get my hands on Burning Kingdoms, which was released in March. I read in entirely in two sittings. Unfortunately, it really suffers from second book syndrome. Burning Kingdoms served as a bridge between book 1 and book 3, and it probably could have been done successfully in half the amount of pages. 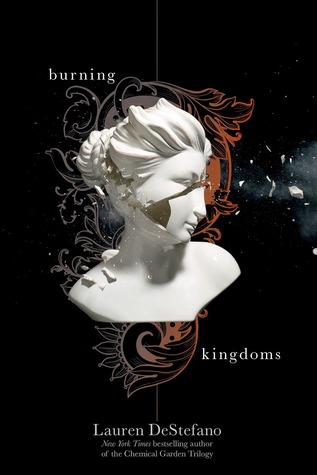 After escaping Internment, Morgan and her fellow fugitives land on the ground to finally learn about the world beneath their floating island home.

The ground is a strange place where water falls from the sky as snow, and people watch moving pictures and visit speakeasies. A place where families can have as many children as they want, their dead are buried in vast gardens of bodies, and Internment is the feature of an amusement park. It is also a land at war.

Everyone who fled Internment had their own reasons to escape their corrupt haven, but now they’re caught under the watchful eye of another king who wants to dominate his world. They may have made it to the ground, but have they dragged Internment with them?

There was a 2 year gap between books the first two books and a cover change. The difference in titles is reflective of this gap, Perfect Ruin does not flow with the latter two titles (Burning Kingdoms and Broken Crowns) I feel like DeStefano might have lost some steam in writing this book, or maybe the publisher wanted to take it in a different direction, and that’s why this book wasn’t as interesting as the first.

The plot consistent mostly of catching up with the characters who spent their time drinking and partying and whining. The world around them is vast and huge, but they spend all their time at home or in speakeasies. I figured there would be a lot more exploring going on.

The world that they have descended to is a light-fantasy mixed with 1920’s (ish) earth. The country is at war over a precious metal and Internment hovers above a amusement park. The people on the ground are aware of the floating island, but they do not have the technology to reach them. The introduction of mermaids was interesting, though they never were actually seen. What I loved the most was Morgan’s comments about graveyards, calling them gardens of bodies and her narration surrounding how this world buried their dead instead of cremating them.

I won’t deny that Lauren DeStefano is a brilliant writer. Her style is fluid and poetic. Her writing is a joy to read. However, this book did lack a lot of the plot, action, mystery and intrigue that the first book was packed with. Burning Kingdoms was very anti-climactic. In this book, we learn more about the characters and are introduced to many new ones. One thing that Lauren DeStefano is amazing at is writing conversations and revealing the bonds between characters. This lady really gets people and knows how to write them realistically and keep the reader engaged. (Something that I as I writer do struggle with, I’ll admit!)

I found the ending rather adrupt, and the final installment Broken Crowns doesn’t release until sometime in 2016. But I just found the 2.5 short story epub about Prince Azure to tide me over until then. I really hope the plot gets kicked into gear for the final installment, because this series started out with so much promise.